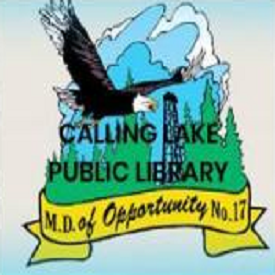 About Us Toggle navigation

History of the Library

With a stated purpose to "get people reading, both children and adults", community volunteers  met with representatives from the Municipal District of Opportunity Library Board to discuss establishing a public library for Calling Lake under the wing of The Peace Library System .  The biggest challenge was finding space to house the donations of books from local readers and other libraries.  A small room, on the south side of the Community Complex, became available and local volunteers began the work of cleaning and painting the premises, setting up shelving and sorting the books.

The Calling Lake Public Library was open to the public in 2004 but did not have its official “Grand Opening” until August 22, 2006.  Joy Grant, the library manager at Wabasca Public Library, helped organize the books and offered basic training in entering books into the system.  She became the library manager for both libraries and continued to work with and train our local librarians.

Twice, larger spaces for the library were found in the community complex and community volunteers undertook the task of moving all the furniture and books.

During the latest move, four computers were installed for public use each with access to the Supernet.  WiFi access was added for mobile users.  The workstations have proven popular with patrons wishing to complete online courses, create resumes, and search the internet for topics of interest.   The library also started a book club that has been popular with local residents.

The library has always tried to be mindful of the needs of the community when purchasing books and offering programs.

Today Calling Lake Public Library, along with the other two public libraries, located in Red Earth Creek and Wabasca, enjoy support for literacy and generous funding from the Municipal District of Opportunity #17.